The client came to the architect to design a detached garage with a CrossFit gym on the second floor.
The garage was to be able to store an antique Jeep, which the owner had restored as a teenager. The garage was also to be connected to the house by an exterior breezeway. The second floor was to be a personal gym and had to adequately hold specific weight machines as well as provide enough floor area for the exercise routines specified by the owner. It was crucial that the new addition fit in with the historical period and style of the original house. Through the use of materials and details, the architect designed an exceptional dwelling that compliments the existing house in every aspect and feature.

Before View from Driveway
Before view of existing sidewalk and after trees were removed: 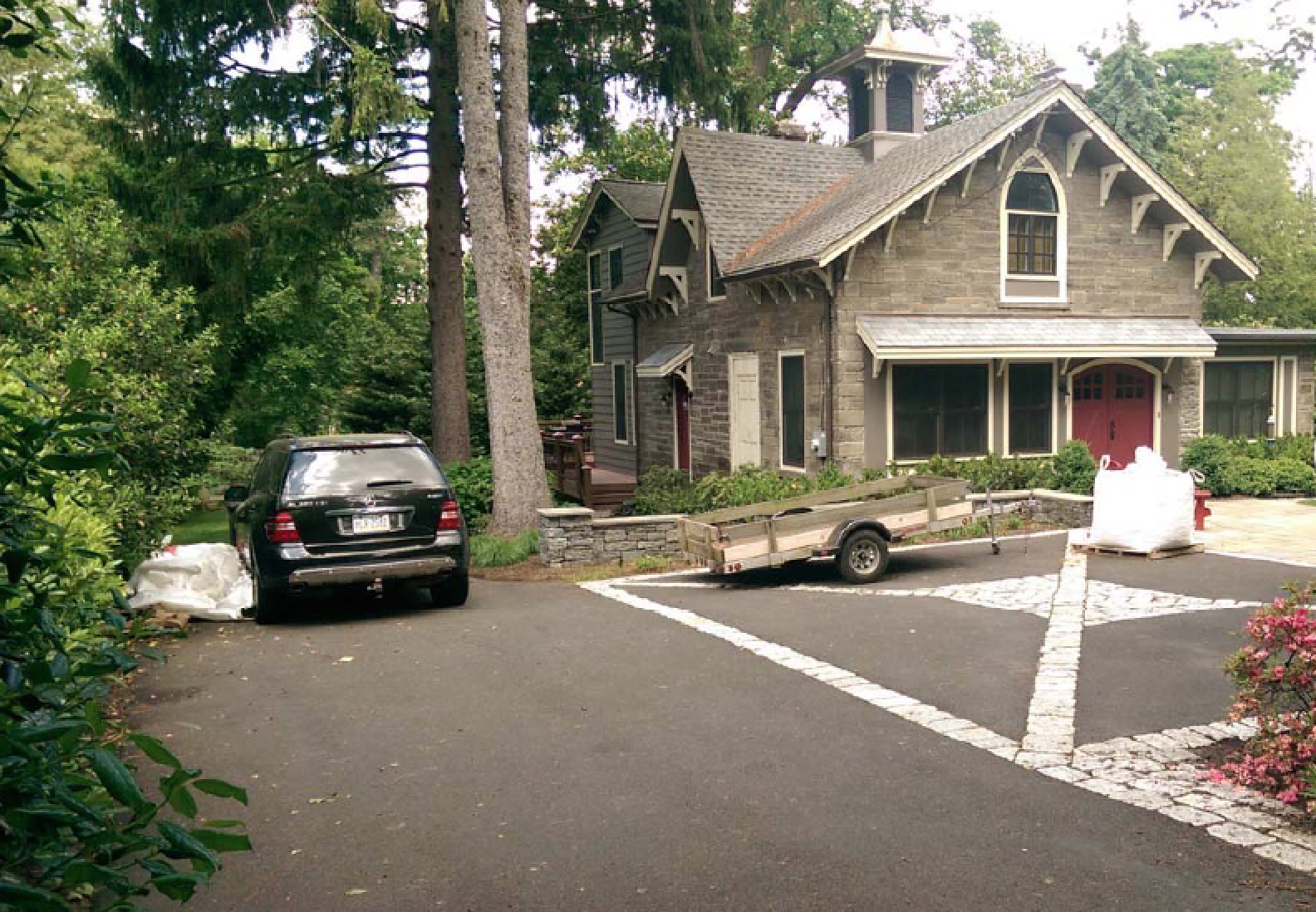 Before construction of the garage began, two large pine trees were required to be cut down (see picture above). These two large trees had root systems, which required extensive excavations to remove them. One of the main design challenges of the garage was the requirements of the structural members. The structure of the building had to be increased because of the techniques used in weightlifting and crossfit. During a workout, heavy weights are oftened dropped at the end of a routine. This creates a large impact load to the floor. Because of this, the floor had to be reiforced. Therefore, second floor joists were increased accordingly by using 1 ¾” x 11 7/8” lvl beams at 12” on center as joists. 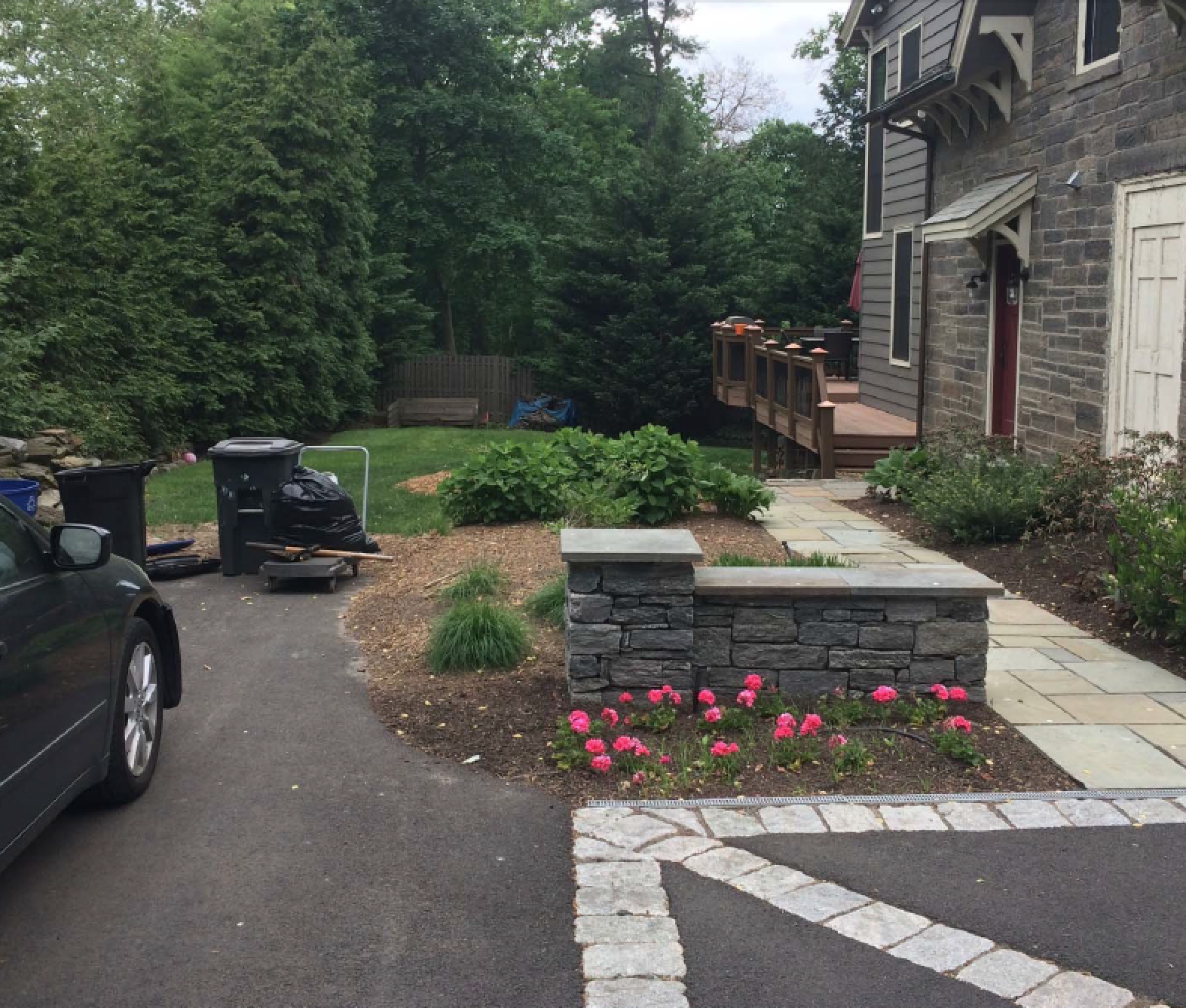 This was required to prevent failure of the members resulting from the impact loads. Also, extra reinforcing was added directly below where the wieghts would drop to prevent the weighs from breaking through the plywood subfloor. The second floor room was also cathedraled without collar ties for entire span of the roof. This required a large lvl ridge beam to support the space. Because the weight of the beam, it was decided to have a crane set the lvl ridge beam. To accomplish this, the gable walls were built as one single elemant with sloped sides to accommodate the rafters to be installed later. Careful planning was made to accommodate the pitch of the roof so that the rafters would perfectly fit to the pre‐constructed gable walls. A pocket was also provided for the beam and an lvl posts installed down to the plates. The beam was then hoisted up and set into the pockets. From there, the rafters were installed and the sheething attached. By building the gable walls as one unit, it created a stronger overall structure. And since there was no horizontal joints, failure from lateral forces was minimized. To make the garage proportional to the house, the exterior walls running parralell with the ridge were set at six feet hight. During framing, strategic planning was considered to accommodate the required structure members and help the final building to withstand all impending loads. 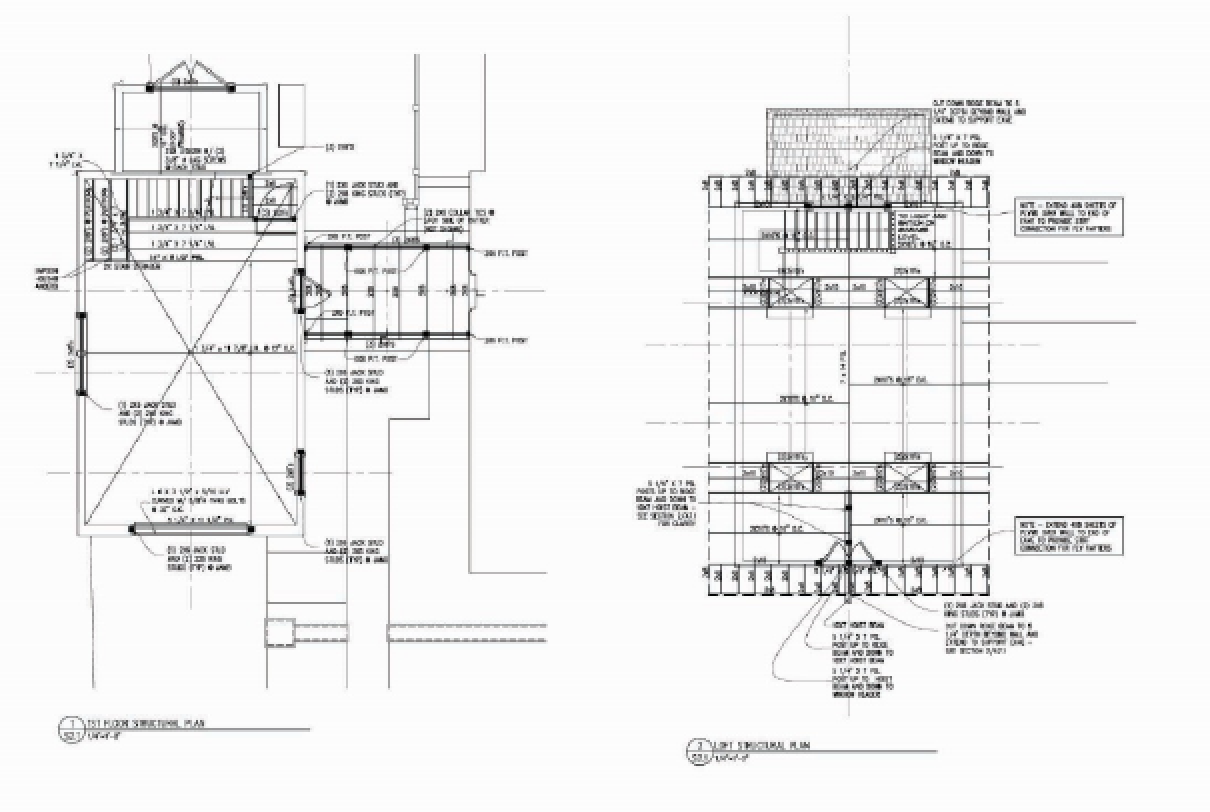 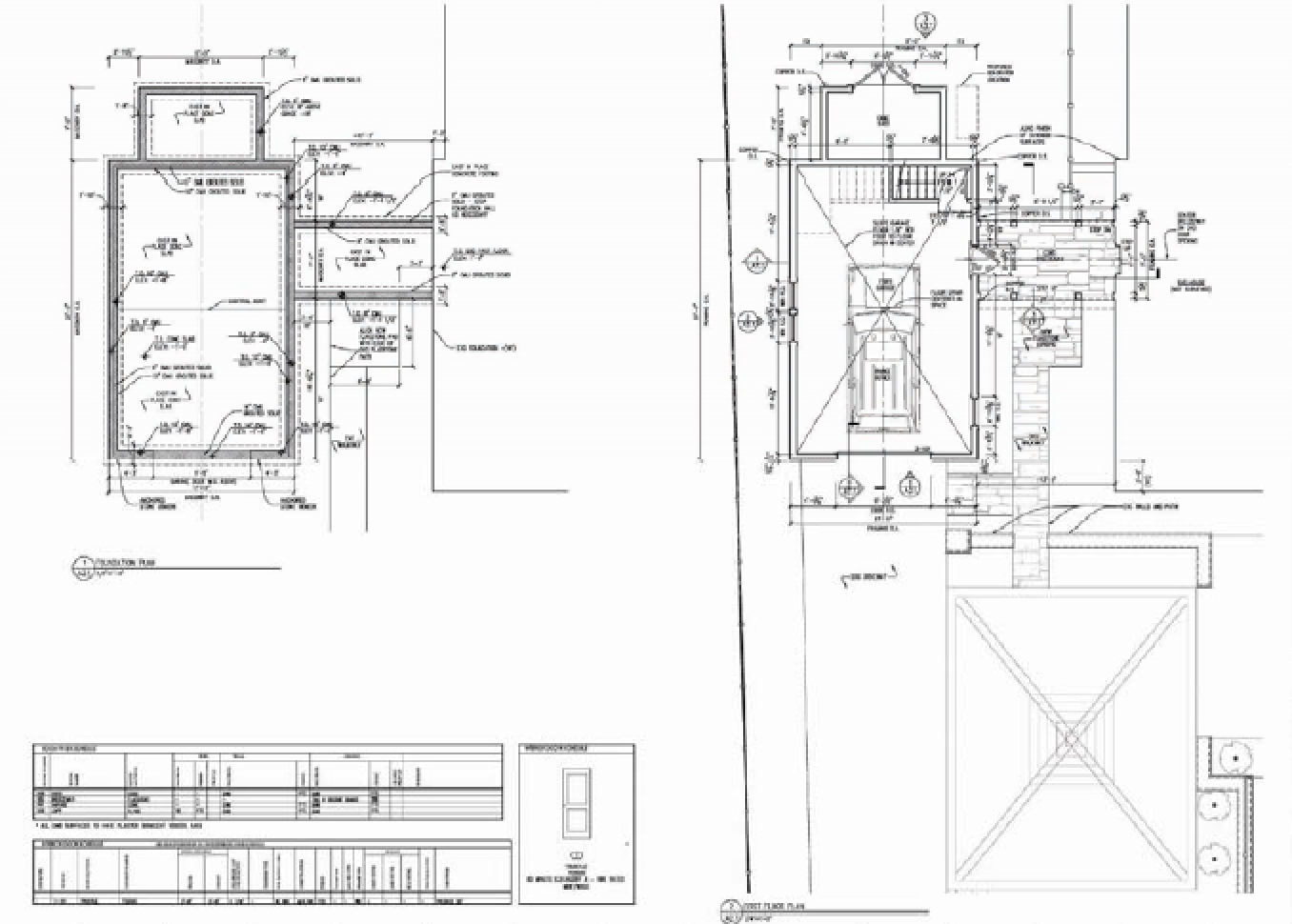 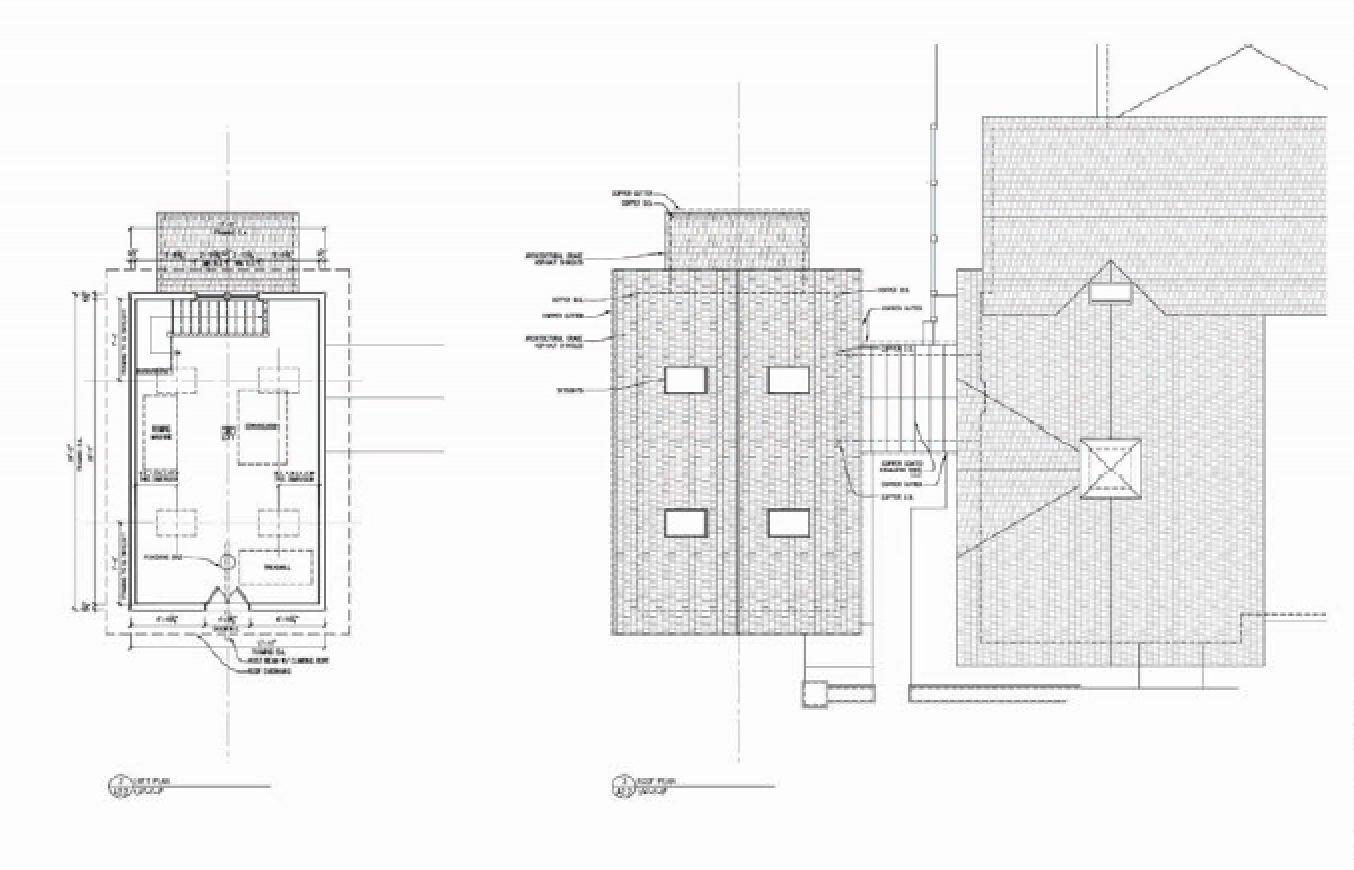 Floor Plans
The orientation of new additions sits directly on the property line and is built on a sloping grade, which runs from the front of the house to the rear. A set of new steps provide access to the rear yard off of the breezeway. Because of the steep slope of the property, the driveway slopes from the main road down to the garage. This is a run of about one hundred yards. A drain was placed directly in front of the garage door and designed to manage the storm water created from the driveway (see picture below). At the front of the garage is the arched garage door surrounded by stone façade wall. This opening was designed to match the radius of an arched garage door selected by the owner. The engineer also specified an arched steel beam to support the stone above. These elements were carefully coordinated to allow the final product to be aesthetically pleasing. Therefore the steel and stone had to be constructed with precision to match the arch of the doors (see picture above). Since the Jeep had a lift kit, Special consideration was made to ensure that the jeep was able to fit into the garage with the arch. The stone that surrounds the door was carefully selected to match the color of existing house. Along the same lines, the craftsmanship of the stonework was just as important to enhance the final product. To relate it to the main house and for superior quality, the stone was hand chiseled and laid in a similar pattern and style. The sides and rear of the first floor are composed of natural stucco and are tooled to fit to the time period of the house. The exterior of the second floor consists of a watertable as a linear separation between the stone/ stucco at the first floor and 8” cedar lap siding above. The siding was selected to match a previous addition to the existing house. PCV corners were used to finish the outside corners. The siding transitions to the soffits with decorative brackets which were built to match the existing house. These were matched is shape and size to further facilitate the authenticity of the dwelling. 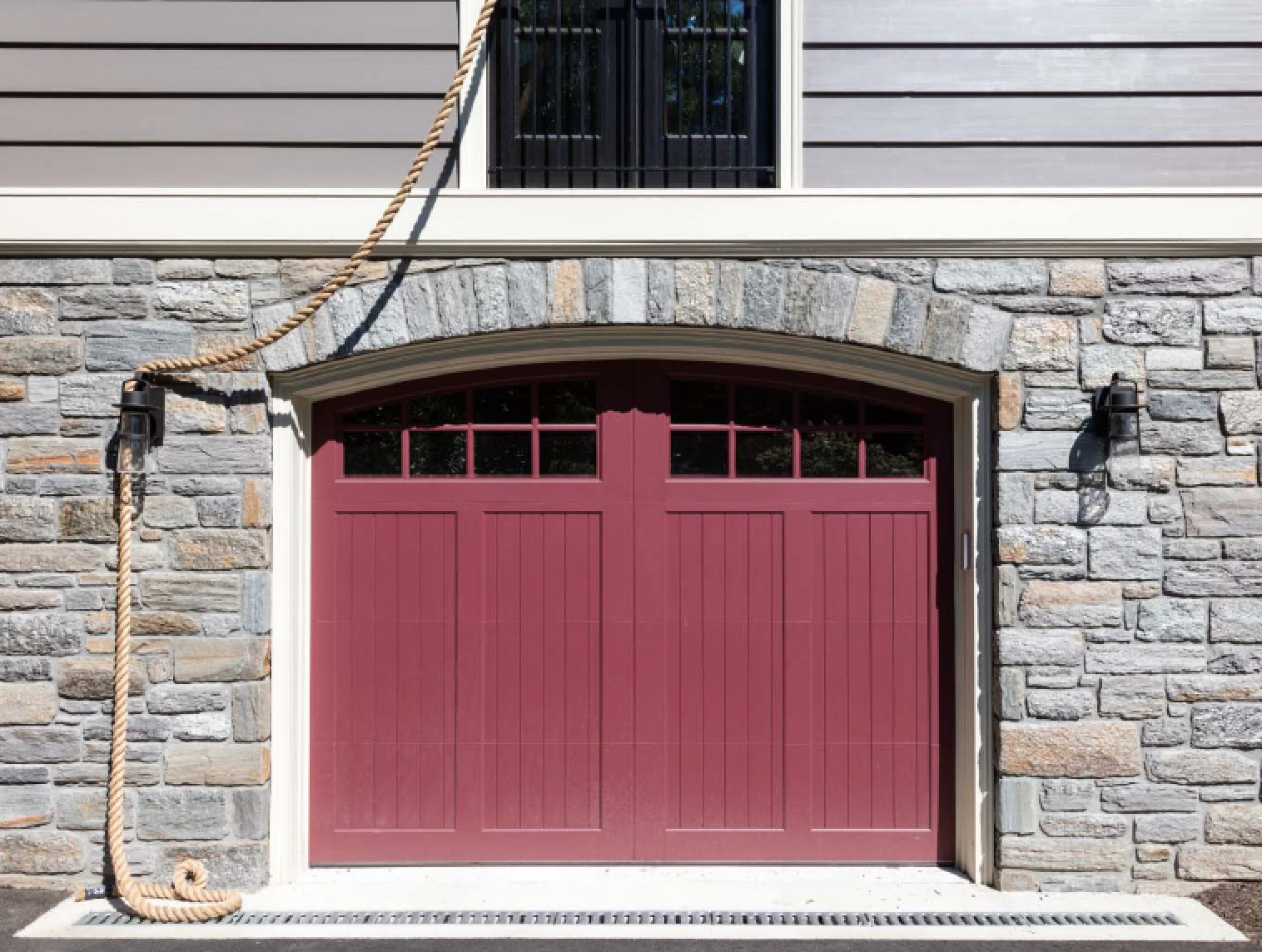 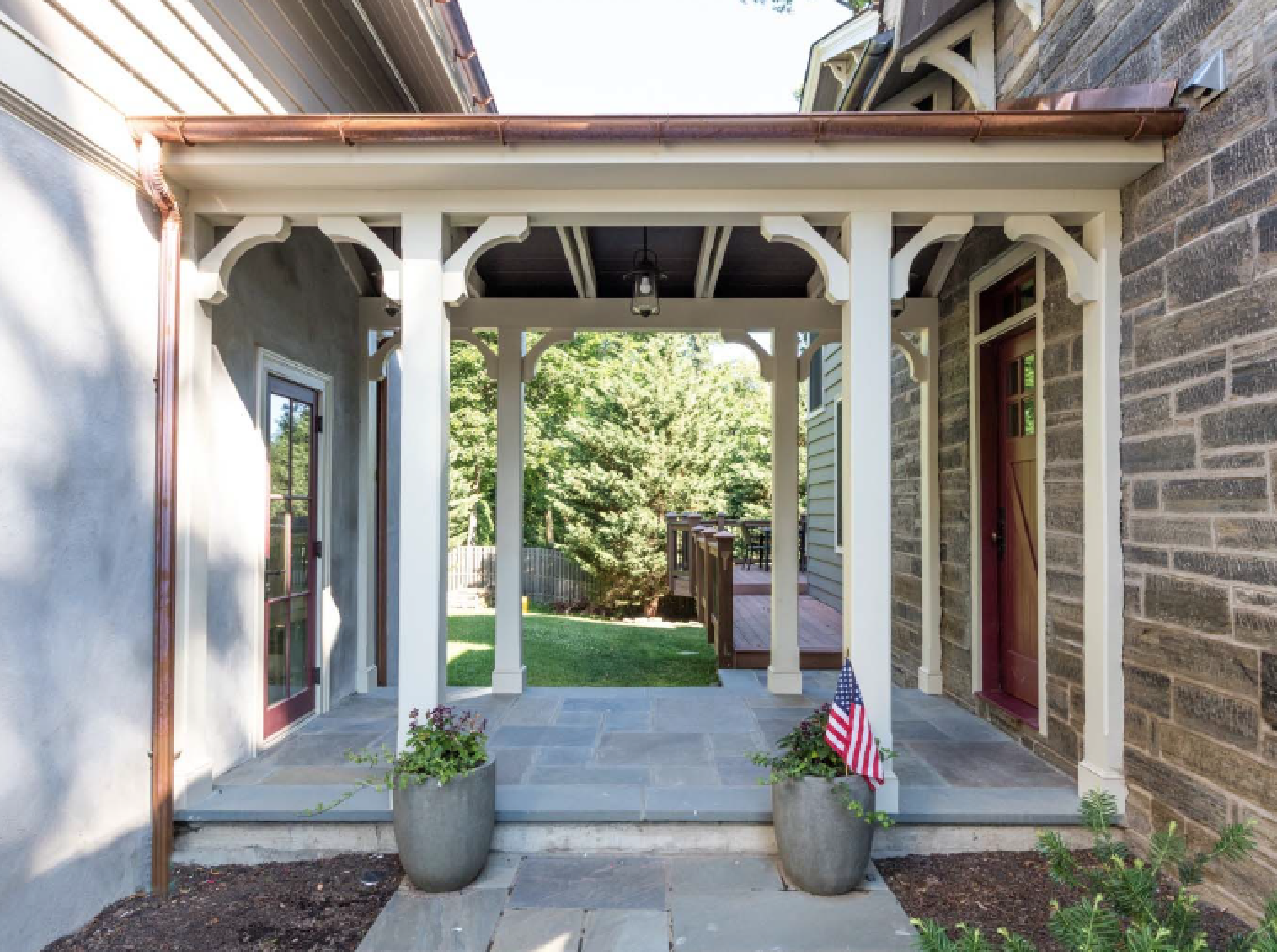 The brackets at the gable ends were beveled at the top to accommodate the roof pitch, while the brackets along the eaves were pitched to accommodate the roof. A custom made crown molding was installed at the rakes and fascia to match that of the existing house. To allow access to the garage from the existing house, a new breezeway was constructed to align with an existing side entrance of the house. The floor of the breezeway is finished with random pattern flagstone to look similar to an existing flagstone sidewalk which ran along the side of the house. Pressure treated post support the beams of the breezeway, which are all wrapped with “Boral” trim boards. The roof framing consists of exposed trusses which were built on site and installed at 24” on center (see picture below). Bead board paneling was then installed on top of the trusses to make up the finished ceiling. Three suspended decorative lights provide plenty of lighting to access the garage at night and enhance the beauty of the existing house.

Trusses
Custom built brackets were also added to the sides of the columns to relate to the two buildings (see picture above). The rear of the addition has an auxiliary shed attached to it. This is to be used to hold lawnmowers and garden equipment. The concrete floor of the shed is flush with the grade. The grade also slopes away from the doors to prevent water from entering the structure. Two custom built cedar doors were constructed on site to provide access and security to the shed (see rear picture below). Copper gutters and downspouts are incorporated to fit the period of the existing house and add to the beauty of the addition. From the front to the back, all the elements of the exterior mend together magnificently with the existing house. 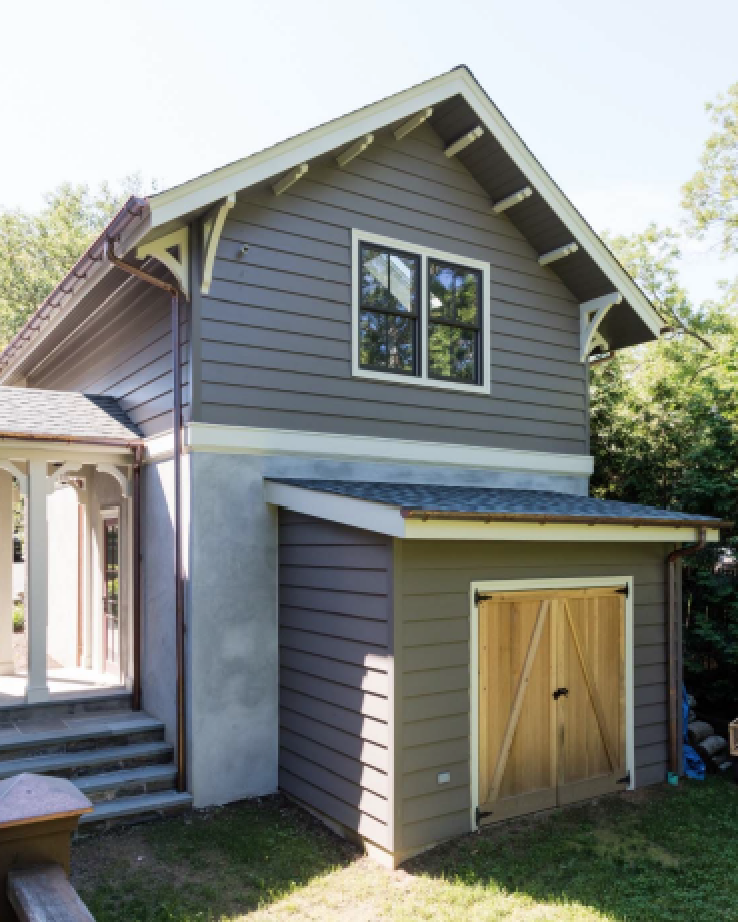 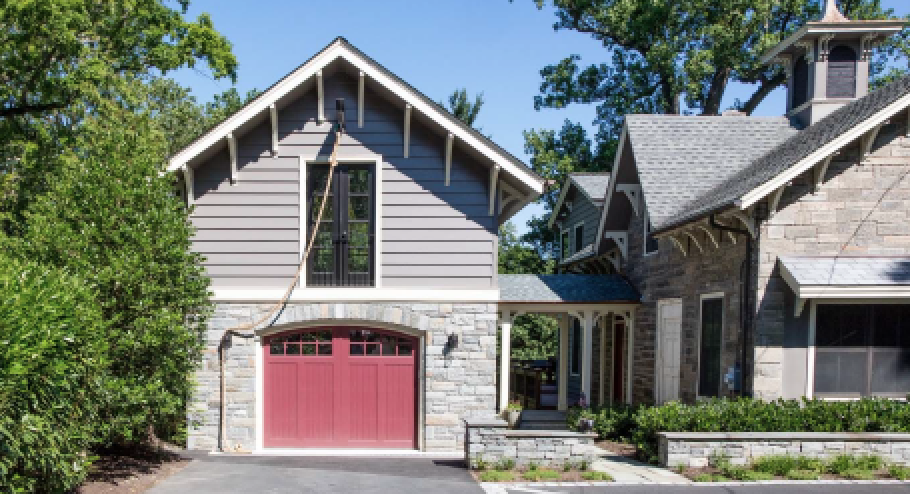 Front view of Garage
The interior of the garage is open with the exception of a set of stairs at the rear to enter the second floor. The second floor is the owner’s personal CrossFit gym. The space is an open floor plan with cathedral ceilings. Four skylights are provided and evenly spaced to allow natural light into the room. This was done because the side walls were lowered to allow the proportions of the new garage to fit in with the existing house and not overpower it. The main ridge beam also supports a unique element specific to this CrossFit gym. A steel beam is suspended from the ridge beam with custom steel brackets and cantilevers out the front of the addition. This steel beam holds a three inch ring welded to either end. The inside ring supports a punching bag and the exterior ring supports a climbing rope which extends to the ground level. An exterior door is also located below this steel beam. This French door includes a removable railing. The railing is there by code, but it is removable so that the owner can perform an exercise specific to his workout routine. When the railing is removed, the owner can then climb the rope during his workout routine. Once he is finished the railing is then replaced to provide adequate safety precautions (see picture below). 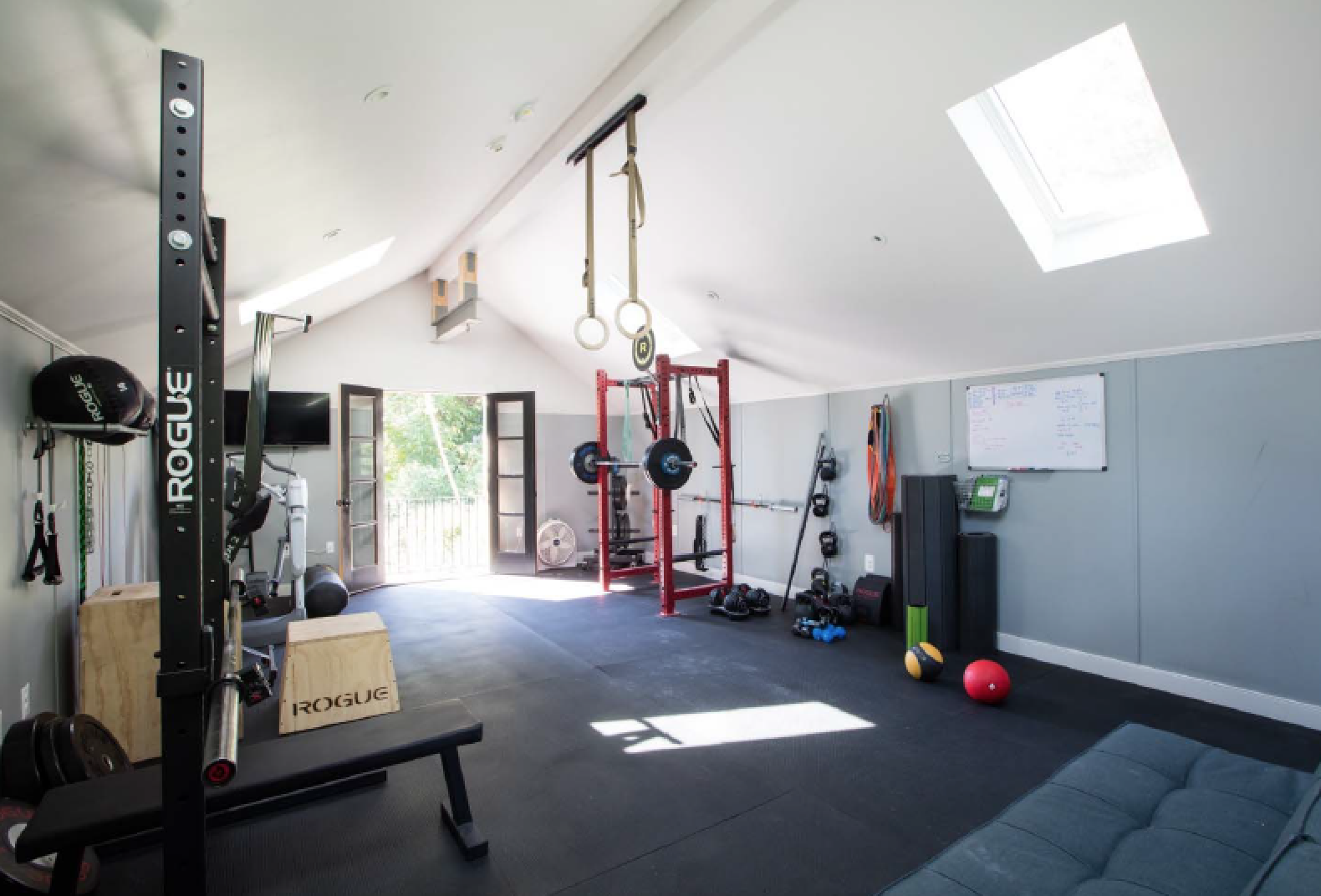 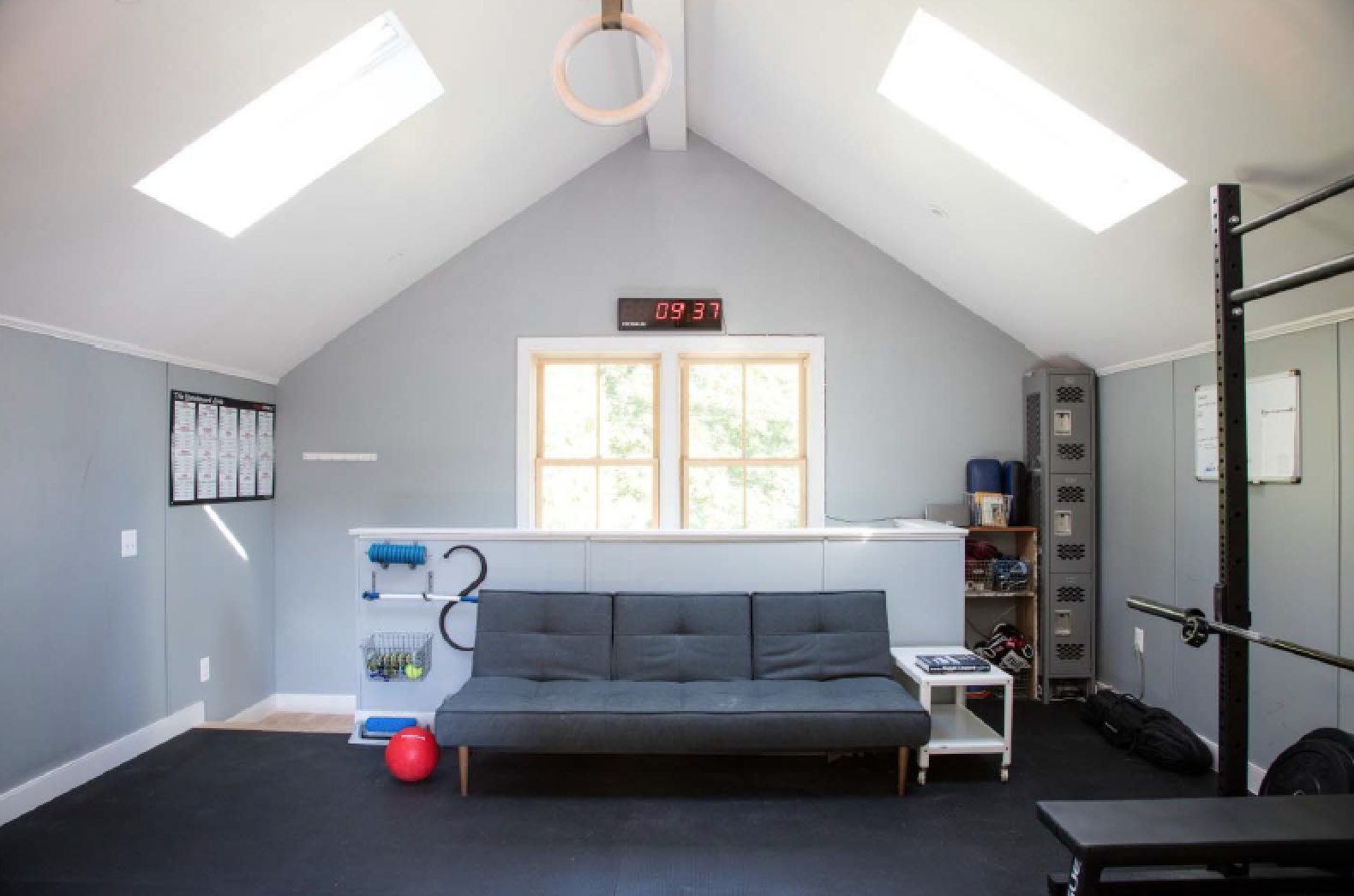 Interior view of stairs
The main room is finished with workout mats at the floor to prevent damage to the weights and comfort for the feet. The walls are comprised of furniture grade plywood to minimize damage from the weights. While the ceilings are covered with drywall for a clean look. General lighting is provided throughout the room in combination with natural light from the skylights. Special attention had to be considered for the garage lights below the gym. Special shock absorbers were installed to the first floor ceiling lights to prevent them from blowing out when weights were dropped on the floor above. This unique element along with the overall open floor plan creates a great workout space and will be the envy of all the neighbors 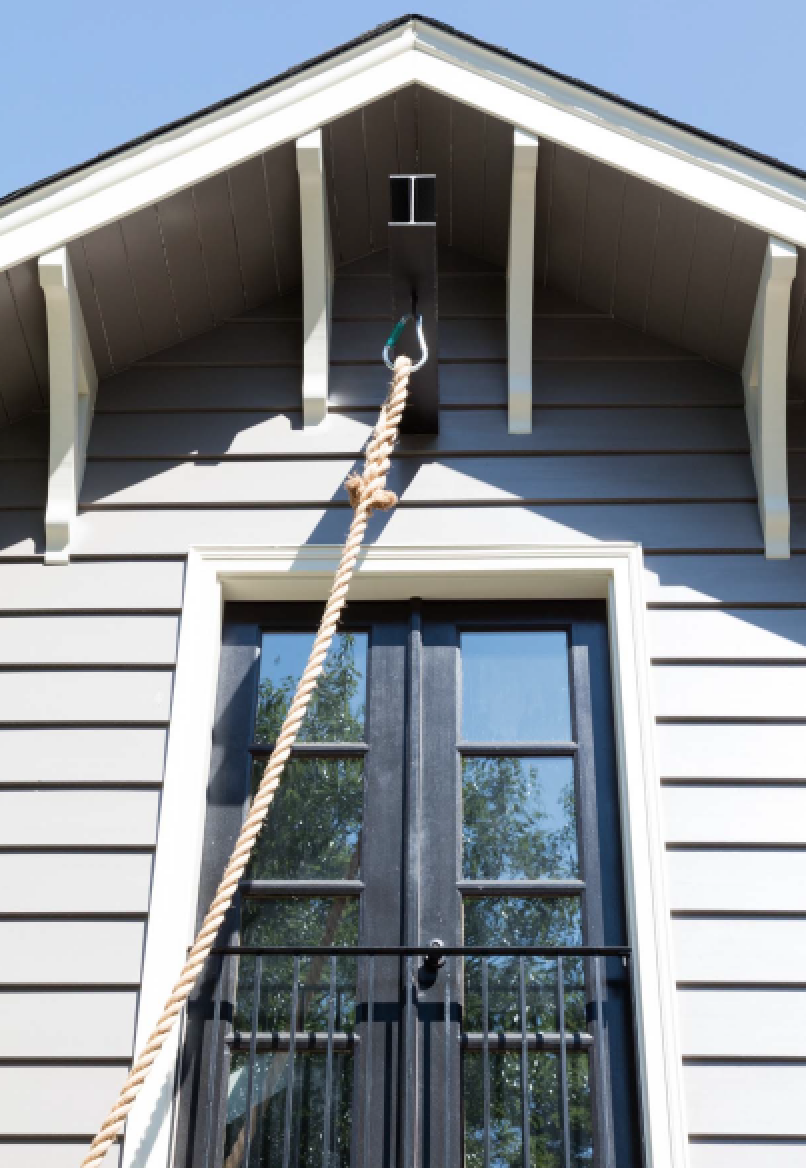 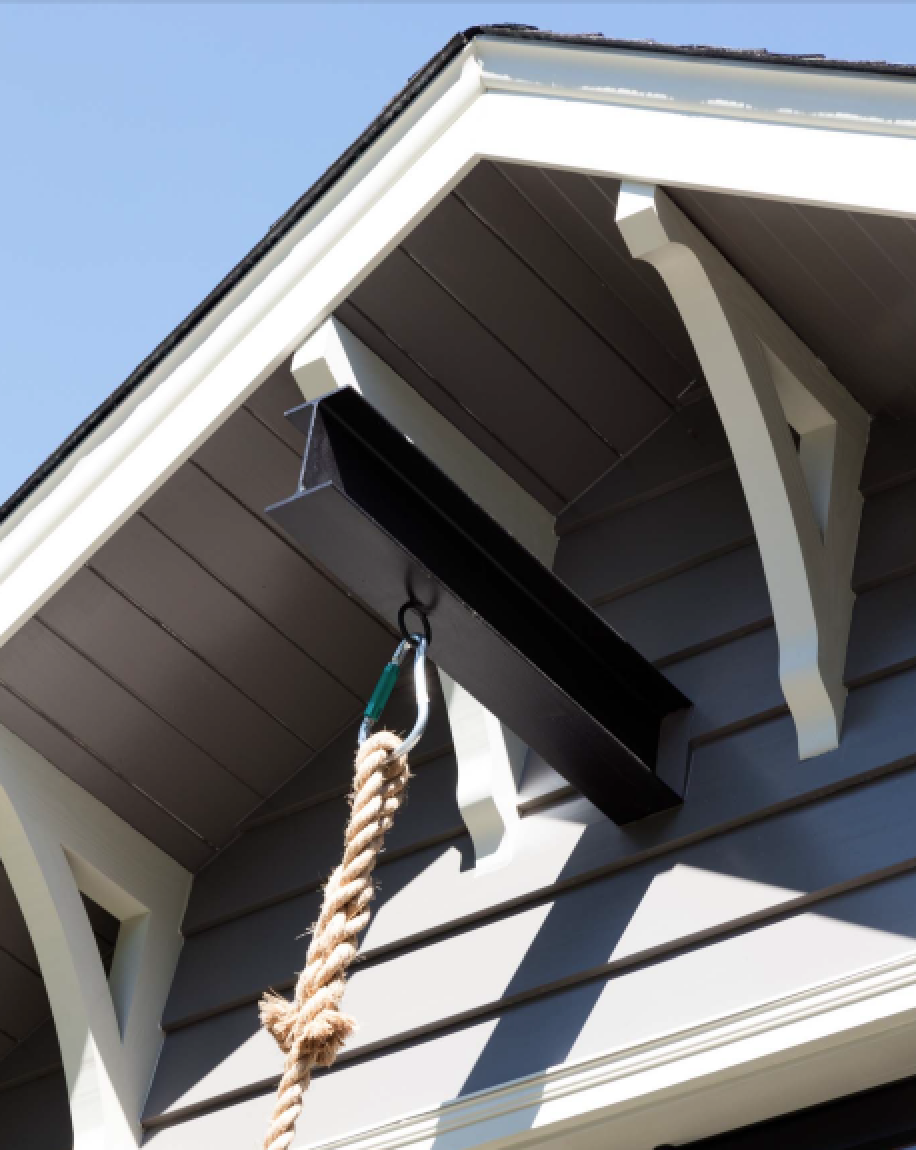 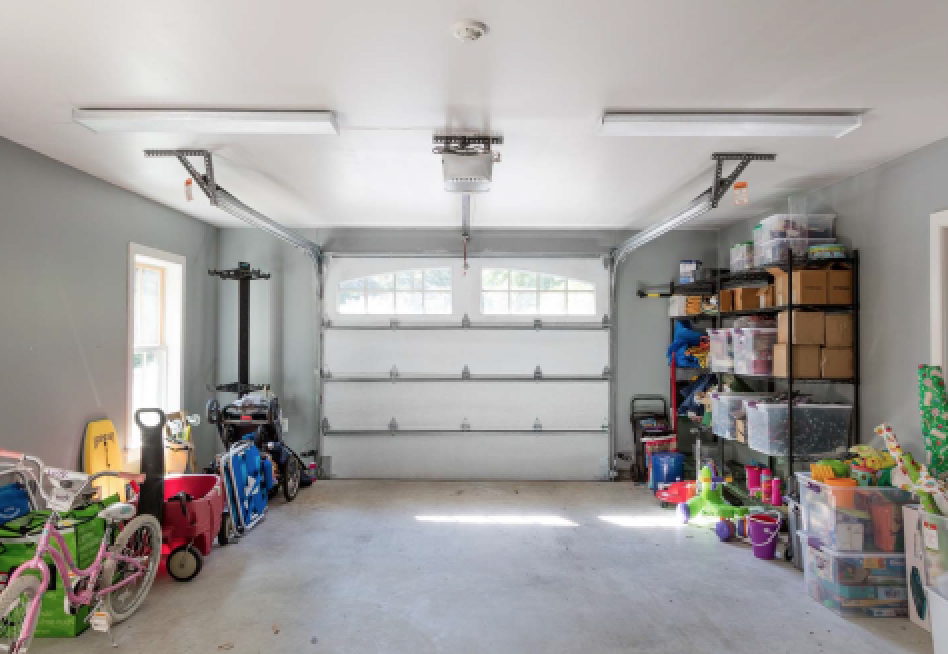 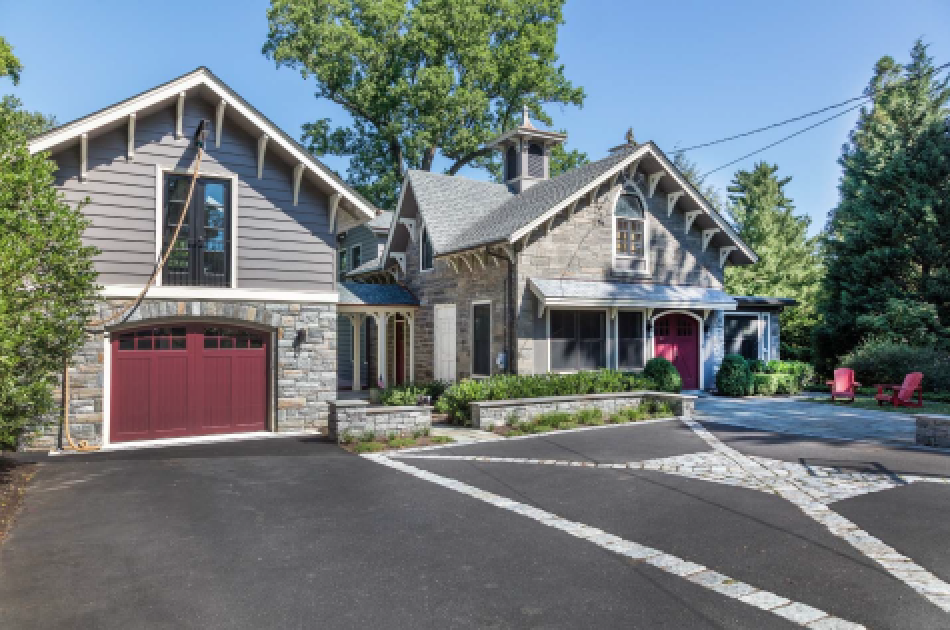 Exterior front view
The owner enjoyed the process of construction and has since been enjoying his new gym. The special details and finishes have made this garage stand out in the neighborhood and complement the existing house in almost every aspect.